You are using an outdated browser. Please upgrade your browser to improve your experience and security.
Louis de Saint-Just
French revolutionary
Media
Print
Please select which sections you would like to print:
Thank you for your feedback

Louis de Saint-Just, in full Louis-Antoine-Léon de Saint-Just, (born August 25, 1767, Decize, France—died July 28, 1794, Paris), controversial ideologue of the French Revolution, one of the most zealous advocates of the Reign of Terror (1793–94), who was arrested and guillotined in the Thermidorian Reaction.

Britannica Quiz
Expedition Europe
In what year did the Spanish drive the Moors from Spain?

Louis-Antoine-Léon de Saint-Just was born in central France, the son of a cavalry captain. His mother, the daughter of a wealthy local notary and a woman of egalitarian notions, wished to reduce the nobility to the level of the middle class. The family eventually moved to Blérancourt, a rural town in Picardy, the native province of Louis’s father, who died there in 1777.

After attending the college of the Oratorians in nearby Soissons, he returned to Blérancourt, a small town offering few distractions. In 1785 Saint-Just became attached to the daughter of one of the town’s notaries. Her forced marriage to the son of the other notary in July 1786 marked the beginning of a crisis for Saint-Just. Hurt and angry, he fled to Paris one night in September, taking with him a few family valuables. Lodging near the Palais Royal, then the centre of a brilliant and dissolute society, he soon ran out of money.

His adventure came to a sudden end when his mother, advised of the situation, had him put into a reformatory. He remained there from October 1786 to April 1787. Sobered by his experience, he decided, like so many young men of the middle class, to establish himself and enter upon a career. He became a clerk to the public prosecutor of Soissons, studied at Reims, and took his law degree in April 1788.

France at that time was shaken by the effects of a poor harvest and a hard winter, which coincided with pre-Revolutionary tremors. In 1789 Saint-Just anonymously published his first book, an epic poem, Organt. It was ignored by the public. A long satirical and licentious poem strewn with political allusions, it was reminiscent of Voltaire’s “La Pucelle d’Orléans” (“The Maid of Orleans”), but it lacked the force and spirit needed for public acclaim. Perhaps Saint-Just was trying to set his own mind free rather than to achieve fame. Organt sometimes suggests the misadventures of Saint-Just, with his violent enthusiasms and resentments, but the eroticism is heavy, and few of the themes of his later work appear. Saint-Just’s friends scarcely mentioned it, and his enemies derided it. The book was seized by the authorities in June 1789, and, although it had been issued anonymously, Saint-Just was prudent enough to hide at a friend’s home in Paris.

In the midst of the Revolutionary upheaval, Saint-Just, eager to participate, found himself ignored. Neither a Parisian nor a popular orator nor a leader of men, he was also not inclined to approve of slaughter. He did not speak of the storming of the Bastille, which he had witnessed, until a year later, when his attitude seemed reminiscent of that of the British politician Edmund Burke, who opposed the French Revolution. Saint-Just returned to his hometown at the end of July. The provinces, like Paris, were in full revolt. Militia or national guard units were spontaneously forming everywhere, and Saint-Just became commander of the second unit organized in Blérancourt.

But first he had to overcome the handicap of his youth and the opposition of local cliques. As a militia commander, he went to Paris for the Fête de la Fédération on July 14, 1790. He did not linger there and later spoke of it in tones of disillusionment.

Saint-Just realized that he could play the role to which he aspired in the Revolution only by election to a key post as an administrator or, preferably, as a deputy. He had, however, not reached the legally required age of 25. For most men the political clubs provided the necessary stepping-stone but not for Saint-Just, who was never a club man, doubtless because he was too overbearing. Instead, he became the municipal corporation counsel of Blérancourt, championed communal welfare and free trade, and set himself up as a spokesman for the voters. At the same time, however, he resumed his friendship with the woman whom he had been unable to marry and, in defiance of gossip, met her publicly.

He succeeded in establishing his reputation beyond Blérancourt in the district, where he was considered an energetic and able candidate for the next National Assembly. To further his candidacy, he wrote letters to politicians shamelessly flattering their self-esteem and even managed to receive the congratulations of the National Assembly after publicly burning a counterrevolutionary pamphlet.

Though he was driven by ambition, his ambition was to serve the cause of the poor and the peasants, and, if he turned toward Maximilien de Robespierre, the most pitiless of the revolutionaries, it was from conviction. Saint-Just now proposed directing the Revolution beyond benevolent and patriotic activity toward the making of a new society. In 1791 he finally published Esprit de la révolution et de la constitution de France (The Spirit of the Revolution and the Constitution of France). The exposition was bold, vigorous, and lofty. The brief, forceful, and elliptical formulations characterized the author. According to him, the constitution framed by the Assembly was acceptable as a first step, but the French were not yet free. Nor were they sovereign, but sovereignty of the people was acceptable only if the people were just and rational. “Law should yield nothing to opinion and everything to ethics,” Saint-Just maintained. He confided to his publisher that the boldness of his exposition attracted readers and rightly added that his work, because it was based on less extensive reading than he might have wished, had the originality of a solitary thinker.

At that time Saint-Just believed himself to be on the eve of a political career, and his elimination from the Assembly as a result of his age provoked a serious crisis. “I am a slave of my adolescence!” he cried revealingly.

He then continued his reflections on the great task of building a society based on nature in which men would live together rather than merely side by side. Taking his region as a model, he observed the village communal traditions. This sojourn in the provinces directed his thinking while straining his energies.

His election to the National Convention in September 1792, shortly after he became 25, finally gave him a task cut to his measure. His first speech, in November 1792, was devoted to arguing that it would be just to put the deposed king, Louis XVI, to death without a trial. "Those who attach any importance to the just punishment of a king will never found a Republic," he insisted. His brilliant oratory and his implacable logic immediately established him as one of the most militant of the Montagnards.

When the Girondins were ousted from the Convention on May 30, 1793, Saint-Just was elected to the Committee of Public Safety. In the fall of that year, he was sent on mission to oversee the army in the critical sector of Alsace. He proved himself a man of decisive action, relentless in demanding results from the generals but sympathetic to the complaints of ordinary soldiers. He repressed local opponents of the Revolution but did not indulge in the mass executions ordered by some of the other deputies on mission.

Upon his return to the Convention, in year II of the French republican calendar (1793–94), Saint-Just was elected president. He persuaded the Convention to pass the radical Vent?se Decrees, under which confiscated lands were supposed to be distributed to needy patriots. These were the most revolutionary acts of the French Revolution, because they expropriated from one class for the benefit of another. He also joined with Robespierre in supporting the execution of the Hébertists and Dantonists.

During the same period, Saint-Just drafted Fragments sur les institutions républicaines, proposals far more radical than the constitutions he had helped to frame; this work laid the theoretical groundwork for a communal and egalitarian society. Sent on mission to the army in Belgium, he contributed to the victory of Fleurus on 8 Messidor, year II (June 26, 1794), which gave France the upper hand against the Austrians. These months were the high point of his career.

But his rise to power had wrought a remarkable change in Saint-Just’s public personality. He became a cold, almost inhuman fanatic, as bloodthirsty as even his “god” Robespierre, a man of many human weaknesses, was not. “The vessel of the Revolution can arrive in port only on a sea reddened with torrents of blood,” Saint-Just once declared to the Convention. He, rather than Robespierre, showed himself to be the forerunner of the totalitarian rulers of the 20th century when he said on another occasion,

We must not only punish traitors, but all people who are not enthusiastic. There are only two kinds of citizens: the good and the bad. The Republic owes to the good its protection. To the bad it owes only death.

Dreaded, almost totally isolated, and detested, he was arrested on 9 Thermidor (July 27). Like Robespierre, he did not try to incite the Parisian sansculottes to rise against the Convention in his defense and was guillotined the next day.

Saint-Just has, by turns, been lauded as the archangel of the Revolution or abhorred as the terrorist par excellence. Recent scholarly research has made it possible to draw the line between man and myth. Undoubtedly the Revolution changed the unruly, self-indulgent youth into a principled and decisive, though ruthless, leader. To friends he was also kind, helping them in securing positions. Yet it is doubtful whether he had friends in the true sense, for those whom he helped attached themselves to him without becoming his equals.

Many of his contemporaries acknowledged his ability but considered him a monster of pride and cruelty. Others, particularly in later generations, have viewed him as an incorruptible patriot who paid with his life for his allegiance to democracy. Some have seen in him the prototype of the rebel. These contradictions arise in part from Saint-Just’s complex character and in part from an imperfect knowledge of his childhood and adolescence.

Women admired his attractive appearance, and he could be very engaging when he wished. Nonetheless, he had to make notes on the conduct required “to be fortunate with women.” He measured out doses of eagerness and indifference, affection and restraint, so as to make a love affair last. Yet he could be genuinely affectionate and display real family feeling. This other Saint-Just appears in the famous portraits of Jean-Baptiste Greuze, Jacques-Louis David, and other painters.

History at your fingertips
Sign up here to see what happened On This Day, every day in your inbox!
Thank you for subscribing!
Be on the lookout for your Britannica newsletter to get trusted stories delivered right to your inbox. 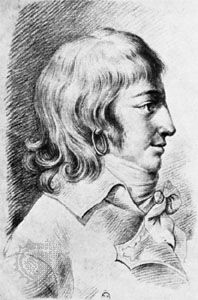